Leaving home sweet home at 6 in the morning … target is to activate ONFF-297 Hornebos and ONFF-194 De Knoppel in the south of the province of Limburg.

Hornebos is on the border between Flanders and Wallonia, so also known as “Bois de Horne“. Nothing special on this one, only woods, trees and forest. That’s it. Setting up has become piece of cake : in about 10 minutes I’m able to install the complete /P station so we started very fast on 14.044 CW followed by 14.310 SSB and 7.097 SSB. Made 168 contacts in 32 DXCC and 4 continents. Best DX : VE6UX and VK1DI/P. 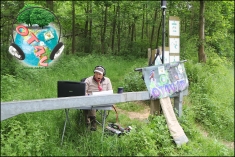 Breaking down goes even faster than setting up, under a cloudy sky we headed to Mettekoven for the second activation : De Knoppel.

We had to ask some locals how to find this one, we found a red marked hiking trial that leads to the reserve. And there, on top of the hill we set up for the second time. Started on 40m SSB with a nice pile up, doing it over on 20m SSB. This time to tired for CW QSO’s, sorry ! ON3FY, brandnew HAM David, took care again of the catering, thanks mate ! In the meantime the sun appeared and we even got some sunburn from this activation.  158 QSO’s with 28 DXCC in 2 continents, best DX : W1OW

This was tough, too tough for my aged bones. Two activations in one day is too much for my suffering body. Think this will be a one time try.

Wanna say  many thanks to my buddy and lifetime friend ON7YZ, Mario, who drove his 4×4 to this remote places.

Note : Got a bunch of paper QSL cards via the buro. I’m repeating : I prefer digital QSL (eQSL, Clublog, QRZ.com, LoTW). Paper QSL cards cost me a lot of time and money. I prefer to put my time in activating in the field, not by writing QSL cards. So PLEASE only paper QSL cards if you really want one !